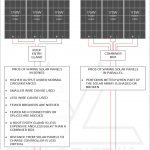 There are two different ways to wire solar panels: series and parallel.  There are a few considerations to this ‘argument’ but by the end of this blog post you will hopefully have enough info to determine which is right for you, as well as the reason that most of the wiring diagrams here on EXPLORIST.life are designed in series.  Here are the two ways; series and parallel, drawn out:

Solar Panels in Series vs. Parallel

All parts on this first diagram are, for the most part, the same.  The panels are all the same 175-watt panels, each has some kind of roof entry gland, a charge controller, and the batteries.

Voltage & Amps of wiring Solar Panels in Series vs Parallel

It’s important to understand that wiring your solar panels in parallel requires more equipment.  To find out what we need, we need to have a good grasp of the voltage and amps we can expect to see at each point between the solar panels and the batteries.  Now, we are going to be doing some math here, but if your eyes glaze over at this part, just push through! The entire blog post is NOT just about the math and the further you make it down the page, the more it will make sense.  Let’s start with solar panels in series:

Starting at the top; we’ve got 3, 175W panels with stats of 19.05V and 9.18A.  Since these panels are wired in series, we need to add the voltages of the combined panels and leave the amps alone.  This gives us 57.18 volts and 9.18 amps. These figures stay consistent all the way down to the charge controller.

The charge controller then takes that 57.18V and 9.18A and regulates it down to 12ish volts where it will be charging the batteries at 41.6 amps.

Let’s switch over to the other side of the page and run-down the parallel system.

Starting at the top, we’ve got the same 175w panels.  Each of these panels wires will run from the panel to the rooftop combiner box at the same panel stats of 19.06 volts and 9.18 amps.  After the combiner box, we have successfully wired the panels in parallel which means we need to add the amps and leave the volts alone.  This gives us 27.54 Amps at 19.06 Volts from the combiner box, down through the roof, and over to the charge controller.

The charge controller then takes that 19.06 Volts and 27.54 Amps and regulates it down to 12ish volts where it will be charging the batteries at 41.6 amps.

Now that we know the voltage and amps we can expect to see at each section of wire, we can now start figuring out what size of wires we can use.

Wire Sizes for Solar Panels in Series vs Parallel

The wiring diagram is fairly straightforward on this one, so check it out:

For series, at the 57 volts and 9 amps, we can use 10 gauge wire for anything under 70 feet from the panels to the charge controller.

In Parallel, we can use 10 gauge wire from the solar panels to the combiner box, but only if the longest wire length is shorter than 24 feet.

After the Combiner Box, since our amps ramp up to a little over 27, we’ve got to step it up to 6 gauge wire but we have to make sure our solar controller is closer than 15’ for the 6gauge to be big enough.

Also, those lengths don’t give us much wiggle room.  We REALLY have to try to make the runs as short as possible because if we have much voltage drop, it further decreases what our charge controller has to work with in terms of voltage.

On both setups, both series AND parallel, 8 gauge wire is recommended from the charge controller to the batteries given we keep that distance under 5 feet, which is pretty feasible as that’s good system management anyway.

Breakers for wiring Solar Panels in Series vs Parallel

Now, we need to talk about breakers because we all know that none of this matters if your wires rub through, short out, and catch your camper on fire.  Dramatic, yes; but let’s get to it.

That example is just for a 3 panel system.  If you want to parallel more panels together, you’ll need to add one breaker per panel you add to the array.

MC4 Connectors for Wiring Solar Panels in Series vs Parallel

MC4 Connectors are the way most solar panels are wired together.  Sure, some people just cut off the connectors and splice the wires together and that’s fine, but for those of us who like the ease of use of the MC4 connectors, there are a few differences between parallel and series.

Solar panels typically have MC4 connectors built onto the ends of their built in wires like this:

And in the following picture, this is how you would be wiring the panels up in series and in parallel using MC4 connectors:

In 90% of installations, when wiring in series, the solar panels can be placed close enough together so that the positive lead of one panel will reach the negative lead of the adjacent panel.  This means you won’t need extra MC4 connectors to make the inter-panel connections.

If that solar panel arrangement works for your setup, you’ll only need 1 pair of MC4 connectors for the whole series.

For Parallel wiring, you’ll need a pair of MC4 connectors per solar panel you use.

Parts List for Wiring Solar Panels in Series vs Parallel

At the bottom of the diagram below, you can see the hardware parts list, side-by-side, showing what it takes to wire solar panels in series vs parallel:

Common arguments for parallel over series.

Recently we’ve been getting a ton of comments arguing for wiring solar panels in parallel and they always go something like this:

“I want max solar output from my solar panels and if I wire in series, park under a tree, and get shading on part of my array, It significantly decreases power to the entire array.”

“I want max solar output from my solar panels and if I wire in series and a panel breaks It significantly decreases power to the entire array.”

In our 3+ years of being on the road, neither of these have been a problem.

Fortunately, I’ve developed a highly-sophisticated strategy for solving both of these problems and still wiring in series and lucky for you, I’ve made diagrams for both of them.

The first diagram fixes the problem in regards to getting max solar output when your camper is parked near a tree that’s causing partial shading to your solar array.

This next diagram fixes the problem in regards to getting the max solar output of an array with a broken panel.

There have been tests done showing how one bad panel or shading on one panel will decrease the output of the entire array.  All of that is true; I’m not debating that.

A story about wiring solar in series vs parallel

The first setup we had on our camper was in parallel because the theory of an MPPT controller regulating 100 volts down to the 12v useable by the battery was confusing to us.

After a few months on the road, we just weren’t getting enough charge to keep up with our usage even though we had plenty of panels.

We called up the manufacturer of our charge controller (Midnite, at the time) and they recommended that we re-wire our panels to be in series.

We did just that and had an immediate and drastic improvement of solar power, particularly on overcast days.

To charge a 12v battery bank, you’ll need closer to 14 volts (depending on battery chemistry.  14.4 for Lithium) to actually start charging. Most single solar panels in the 100 – 200 watt range have voltages in the 18-20 volt range.

If you wire the same solar panels in series, using the same panels as above, you’ll have about 57 volts to work with.  This means that, through the power of the MPPT controller, each panel only needs to be able to muster up 25% of its voltage capacity before it can start making amps in a 3 panel series.

This is why we were seeing such a drastic increase in power output, specifically during cloudy days.

This same reason is also why our panels will start charging earlier in the day and later into the evening as the sun angles are low.  There’s just a bigger range of voltage for our charge controller to work with.

Also:  as solar panels get hot, their max voltage decreases.  If it’s REALLY hot out, depending on the panel; it’s actually possible that the voltage of the panel can fall enough so that it’s not producing enough voltage to allow amps to flow into your batteries.

Last thing. It’s worth noting as voltages get higher, they also get more dangerous and care MUST be taken to not touch live wires specifically once they get above ~40V. Regardless of voltage, though, when working with solar panels, it’s a good idea to cover them up or flip them over when possible so they are ‘off’. Remember… panels in series will have higher voltages than parallel wired arrays.

Now that you have made a decision about how to wire your solar panels for your DIY Camper Van electrical system, it’s now time to learn what kind of charge controller you’ll need to convert the power from your solar panelsinto a form of power useable by the batteries.  You can check that out here: https://www.explorist.life/how-to-choose-a-solar-charge-controller-for-your-camper/

Everything that you are learning here is put to use in our FREE Interactive Solar Wiring Diagrams.  If you haven’t yet, check them out as they are a complete solution for a camper van electrical system.  Check them out here: https://www.explorist.life/solarwiringdiagrams/

Remember, this is just one part of a full camper van electrical educational series.  To see all of the individual guides, click here: https://www.explorist.life/diy-campervan-solar