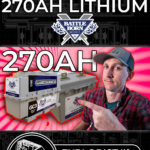 Battle Born just released their newest batteries to their family of LiFePO4 Batteries. We have all been asking them for a few years at this point to release a battery larger than 100 amp hours, and they’ve answered in a big way with two different 270Ah batteries coming in two different form factors.

The Battle Born BBGC3 is a 12V, 270Ah LiFePO4 Battery with an internal BMS. It doesn’t look like any other battery on the market that I’ve ever seen so it’s sure to turn some heads but more importantly… like all of the other Battle Born lithium batteries, it’s a drop-in battery, which means that it is designed to be a stand alone source of power storage with no need for an external BMS.

This battery looks like and has the same dimensions as the standard 8D battery that is common in many OEM RV’s, but that’s where the similarities stop. This battery, like all of the other Battle Born batteries, is a drop-in replacement LiFePO4 Battery complete with an internal BMS.

This battery has a larger foot print than 2x 100Ah Battle Born Lithium Batteries, but is about an inch shorter and has an extra 70Ah of battery capacity.

So, which one is best for your needs? I highly suspect that the BBGC3 will be better for the camper van crowd as van electrical installs are usually more ‘vertical’ and the tall/slim nature of the BBGC3 will likely work better in that regard.

The BB8D will 100% be better for those OEM RV’s that have a factory installed 8D sized battery installed as the factory house battery.

Ultimately, though… you’ll just have to break out the tape measure, some elbow grease, and some CAD (Cardboard Aided Design) to see which size of battery will work best in YOUR space.

The Original 100Ah Battle Born Batteries are still wonderfully awesome batteries and I will very much continue to recommend them here on EXPLORIST.life. The smaller size gives a bit more flexibility in where/how you can configure your battery bank. Ultimately, though, it’s REALLY nice to have options at this point.

The main draw to the bigger battery banks is that you can pack more power into a smaller space and will rely on fewer battery-to-battery connections to make a large battery bank. This means less wiring and a more balanced discharge from the battery bank.

If you want to check out more info about any of these batteries, click the links below to be taken directly to the Battle Born website where you can find all of the specs and figures.

Thanks for reading and I hope you found this blog post helpful and if you did… It’d be awesome if you would share it with somebody, or a group, who you think could use it.  Hit the like button, and leave any questions you’ve got in the comments section below.  Subscribe if you want to see more DIY camper building tutorials and I… will see you in the next project.

If I bought three batteries and have been using one for testing. Do I need to charge it to equal voltage prior to creating a battery bank, when wiring in parallel?

I appreciate all the content you are putting out!

I have a very general question (which obviously isn't a simple answer) about heated batteries for install outside/under a van. Have you shared any thoughts on this that I've missed? I haven't been able to find any quality discussion on this topic. It seems that integrated heat into the battery itself is getting more traction recently, and the space savings inside the van are HUGE!

It always depends on the details of course. I'm planning on somewhere around 200Ah. My van isn't intended to be full live in, it's an adventure vehicle for me and my family. It also transitions frequently between a seat 4 sleep 4 adventure setup and a full 3 row passenger setup, so the passenger setup is when i'm trying to same space over a typical around the wheel well electrical cabinet setup.

I live in the PNW, and take a few trips per year to the Rockies/Wyoming for ski trips so the temps my van sees can certainly get to the point where it's ideal to have the battery inside a heated van OR separately heated (?).

Can you provide your high level thoughts or point me towards some good content to further my research/analysis paralysis)?

Outstanding. Informative in a very easy to understand way.

You Rock Nate, The local solar guy says for a big system, i want a 48V system... And he has 48V Lithium batteries available (actually seem a better deal) My issue with them is that they are 75lbs each. I live in canada and theres a good chance I will occasionally have to disconnect them and take them inside and id really rather deal with 30lb things I can viably carry around. You make no mention of 48V batteries yet you say even these 12V batteries are capable of 48V systems. And I watched your vid on how not to think of Solar panels as any specific voltage. Are batteries the same? Can I use the 48V ones with your wiring diagrams? Do I need special wiring diagrams? I can get...12V Lithium 100Ah/1200Wh for $1400 but 48V Lithium 3200Wh are $3000

Excellent. I have done more research and I have learned SO much! For our system, we are going to need a lot of power (But not big loads...small loads for a long time) Our biggest is we need to power two computers, extra monitors, router etc. (600W) for possibly 12 hours a day. And what with Canadian Winters providing 1 hour of useable sunlight a day (If we are lucky) that means a lot of batteries. So it will be that sort of a big system. But we don't need Air conditioning and we have a gas generator for the power tools. All good. 12 V system is going to be fine! Thanks so much!

I'm looking to utilize both 12 and 24 volt components/appliances in my build. I plan on wiring two 12v (BB GC3's) batteries in series, plus use a 24v inverter/charger with a separate 24v to 12v step-down component, and want to know:

1. How to modify or best use your power audit spreadsheet to more accurately estimate power consumption for 24v items? 2. It seems that amperage draw using 24 volt items (such as a refrigerator) could be more than twice as efficient as 12v; i.e. less than half the amp draw. If correct, would recharge rate @ 24v; whether from shore power or solar, be equally efficient; i.e. better than half the time?