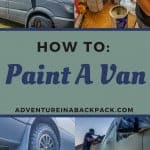 We HAD to get rid of that awful white creeper van color.  So, we painted our van ourselves… and it actually turned out really well! Okay, it wasn’t actually paint, but PlastiDip.  It was pretty easy, honestly.

PlastiDip is actually not a paint, but a rubberized coating.  It was originally used for dipping tool handles, but it has been used to paint cars for several years now, thanks to DipYourCar.com.  The process is relatively easy and it’s a great DIY project for anyone who enjoys tinkering with things on their own, like us!

PlastiDip is also very affordable.  This whole project cost us $765.81.  Yes, that’s seven HUNDRED, not thousand!  After being quoted around $7-9k on vinyl wraps, it was a no brainer to go with PlastiDip.  I mean, we could mess it up and redo it almost 10 times and still stay under the cost of a vinyl wrap!

MATERIALS AND TOOLS WE USED:

This whole project took us three days to complete, and that was with one major mistake made, which I’ll talk about in a minute.

Clean and Dry:   One of the most important steps to any project is the prep work.  We washed the van twice the day before getting started on the PlastiDip, to ensure it was completely free of grease and grime.  Then we let it dry overnight to ensure there was no moisture on the van.  If there is any moisture, the PlastiDip will not stick and will bubble where the moisture is.  So be on the lookout for that as you get started.  Our major nemisis this project was the morning dew.

Tape and Mask: One cool thing about PlastiDip is that it is removable, so if you get it on a part that you didn’t want it on, you can just peel it right off.  However, it does make the process much easier if you take a few hours to mask off the parts you don’t want painted.  We masked off the windows, windshield, wheels and tires, and protected the radiator with cardboard.  All of the masking equipment came with the Advanced Accessory Bundle, but we did end up using another roll of paint tape that we had on hand.  We also used some heavy duty trash bags to protect the wheels.  If we were to do this again, I would just purchase some wheel covers, because the bags were a PITA.

Pre Dip Spray: The last bit of prep before you get started is the Pre Dip Spray that comes with the Advanced Accessory Bundle.  This removes any more grease and grime that might be left over.  This is actually a pretty powerful degreaser, and we noticed that it was actually dissolving part of the window seals as we sprayed it on.  It wasn’t detrimental in the small amount, but if you start seeing grease streaks, that is why.  Just be careful around any seals or rubberized parts and you’ll be fine.

Mix and Spray: Now for the fun part!Using the included mixer attached to a drill, we mixed up the PlastiDip and poured it into the sprayer.  The PlastiDip comes pre-thinned, so you don’t need to add anything to it.  Use the included filter funnels to pour it into the sprayer and you’re good to go.  We did a few test sprays on some old wood before we started so that we could get a feel for how the sprayer worked and what size spray we were getting.

As you spray, it’s recommended to do long, sweeping strokes and overlap by 50% each line.  It took us a while to get the motion down, but once we did, it worked great.

We started with the roof and made sure that was done and fully cured before moving on, because we wouldn’t be able to lean the ladder back up against the van once we moved on to the body.  Scaffolding probably would have made this project easier, but we didn’t have access to scaffolding.  So we made it work with ladders!

We ended up having plenty of Gunmetal Grey, but we did run out of the tan at the end.  I think one panel only got three coats, but it still looked good.  If we were to do this again, we’d get an extra gallon of Tan.

The sprayer that came with the PlastiDip was actually very high quality and worked very well.  This is a regular spray gun, so we can keep this and use it for any other projects that we may need a paint gun for, or even more PlastiDip projects in the future.

If we can help anyone avoid a big headache, we definitely want to try! The one thing that we did not know before starting this is that you shouldn’t spray in direct sunlight and high temperatures.  Basically, what happened was that the PlastiDip started drying before it hit the van, so we ended up with a fuzzy look after a few coats.  We did some research and found that most people just peeled it off and started over when that happened.  But alas, we are not quitters!

How We Fixed It: This fix actually ended up working REALLY well.  We got a few gallons of Xylene, which is a strong solvent similar to paint thinner.  We put the Xylene in the spray gun and lightly sprayed it onto the fuzzy PlastiDip.  That allowed the PlastiDip to re-liquify and smooth itself out.  Then when the Xylene dried, it was smooth and looked perfect.  Honestly, this worked WAY better than we had imagined!   Be sure you use a respirator and gloves with the Xylene, though, as it is very powerful.

NOTE: DipYourCar now has a Dip dissolver on their website for these types of fixes! We’d recommend you try the dissolver before trying Xylene, as their dissolver is all natural and made for this purpose.

Tip 1: Having two step stools and a helper made the higher parts of the van easier to access.  Stephanie was in charge of moving the step stools around and Nate was able to just step over from one to the next.  This cut our time down quite a bit. *Don’t do this if you have bad balance…*

Tip 2: Anything that you don’t tape off, such as the headlights, will get overspray on them.  You can peel it off pretty easily, especially if there are several coats.  If there are just a few coats and it is harder to peel, a microfiber cloth works REALLY well for getting it to peel off.  I figured that out after spending about 30 minutes on one headlight… then the microfiber cloth took it off in about 2 minutes!

Tip 3: If you do a two-toned look like we did, using a sharp blade to remove the paint tape will help keep the PlastiDip from peeling up.  If you do have a spot that peels up a tad, use a Q-Tip with a tiny bit of Xylene to seal the Plasti-Dip back down.  I think we will keep some Xylene on hand for any bubbles or tears that come up on the road as well, as it seems to work really well.

Tip 4: The handles are going to peel off; it’s just how it’s going to be.  Ours are starting to lift off after just a week or so because of the angle and the high amount of traffic they get rubbing on them.  We are perfectly fine with it coming off and just being black again, but if you aren’t okay with that, I suggest taking them off and painting them separately so that you get full coverage.  The problem was that we couldn’t get to the back of the handle with the spray gun, so it left a line that made it easier to peel off the PlastiDip.

Tip 5: Put cardboard in front of the radiator to protect it from getting overspray on it.  We sprayed the grill separately in the garage after the van was done.

Tip 6: Make sure there is no moisture built up in the emblems!  This is a spot that catches and retains water, so we took Q-Tips to it before starting the spraying process.

After PlastiDipping the Sprinter van, we couldn’t help but notice how bad the wheels and tires looked with this awesome paint job.  So, although the project ended up costing less than $800, we ended up spending another $1600 or so on new wheels and tires… totally worth it!

Certainly great job, however few years passed, how is this holding up through hot summers, winters, hail, snow, frost, rock chips etc.? How you wash mud and dirt. How to maintain the "New" look.? Thank you for the answer...

Still going strong! We don't wash it though.

Amazing job on the plasti-dip. And pretty much everything you've done on the van. And this site. And... well everything. I'm considering doing this to a van I haven't even purchased yet. One question on the multiple colors. For your base(grey in your case), how long did you let that dry/cure before masking to ensure you wouldn't peel off the grey?

Thanks so much! We let the grey sit overnight. I don't know how necessary that truly was, but we were just at a good stopping spot. Tech support for plasti dip is usually pretty on point with recommendations so it may be worth a double check there.

If you get a scratch or anything does the plastidip start peeling off from that spot?