Bison and Geysers and Bears, OH MY!

We arrived at our boondocking campsite and didn’t have much of a plan for Yellowstone National Park aside from sightseeing.  Our number one priority in the park was to see some bears!  Wildlife in general was high on our list, as we hadn’t seen much other than birds and deer since we left Colorado.    So we decided to first take a driving tour of the main part of the park to see some of the landscapes, and then take a sunset tour for wildlife viewing. 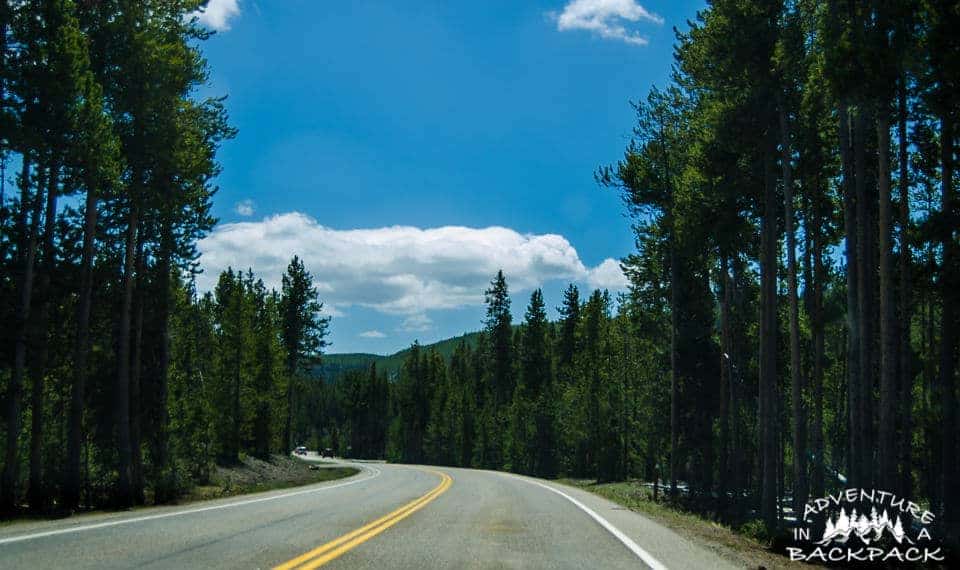 First off, Yellowstone National Park is HUGE.  You aren’t going to cover all of it in one day, even if you drove from sunrise to sunset.  Part of the park was closed due to bear activity, so we were pretty well confined to the west and north side of the park anyway.  Also, be sure to start with a full tank of gas.  There is a fill station at Old Faithful as well as Mammoth Hot Springs, but you’d rather be safe than sorry! 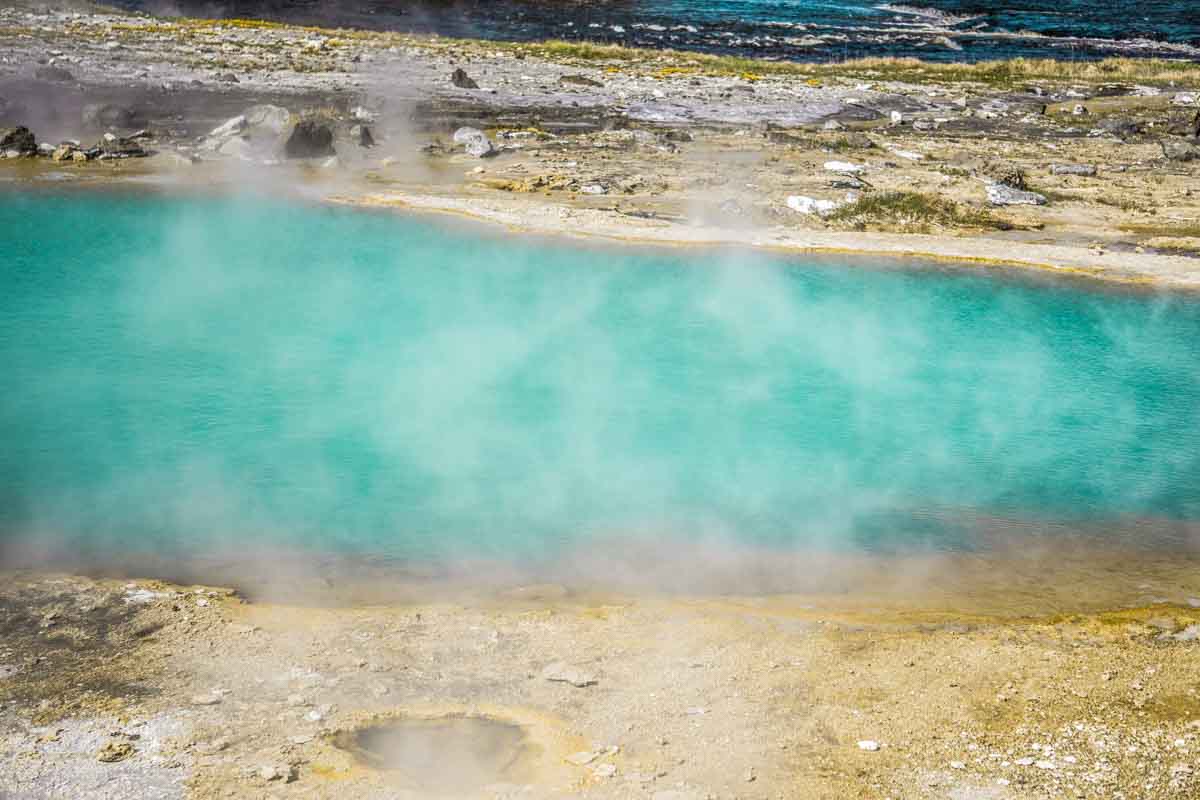 If you drive south from the west entrance, it will take you to Old Faithful as well as several other hot springs and geyser areas.  We watched Old Faithful erupt and then hiked to Lone Star Geyser to watch it as well.  There are tons of geysers in the Geyser Basin, and you can walk around the boardwalk waiting for one of them to erupt!  That is pretty cool!

Driving north in the park, this scenic route is full of pull-offs to view the landscapes as well as wildlife.  There is a very impressive hot spring right off of the road.  The heat and steam coming out of the ground here is a sight to see, and you won’t miss it because you’ll think you are driving right into it! 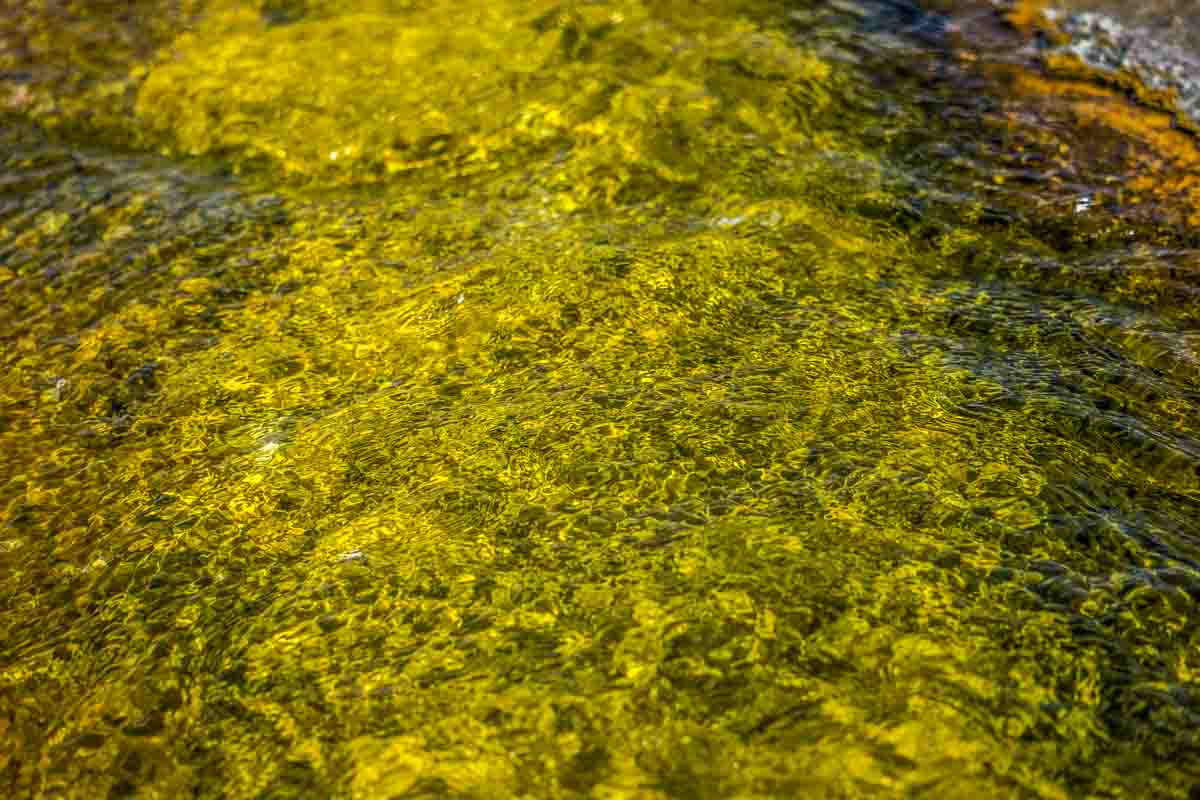 Continuing north, you will eventually come to Mammoth Hot Springs.  The springs here are by far the coolest and most interesting sight on that side of the park.  The different colors that the springs form are spectacular.  We were amazed at how the earth could change forms so quickly, even engulfing and petrifying trees where they once flourished! 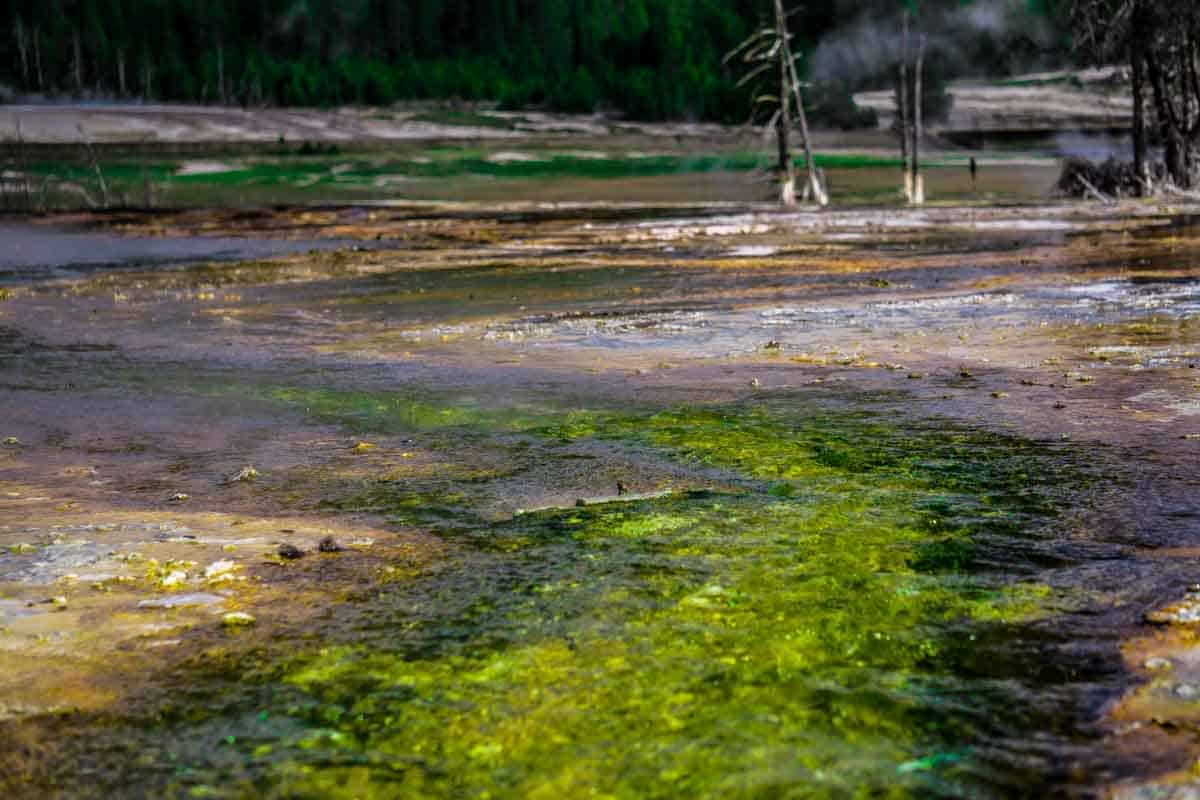 Once you come to the town of Mammoth Hot Springs, you’ll turn east and head over a long bridge and up a winding road until you come to the Lamar Valley.  From what we had read and heard, this would be our optimal opportunity for wildlife viewing, and either right after dawn or right before dusk.  We drove this area right before dusk (and into/after dark), and it did not disappoint! 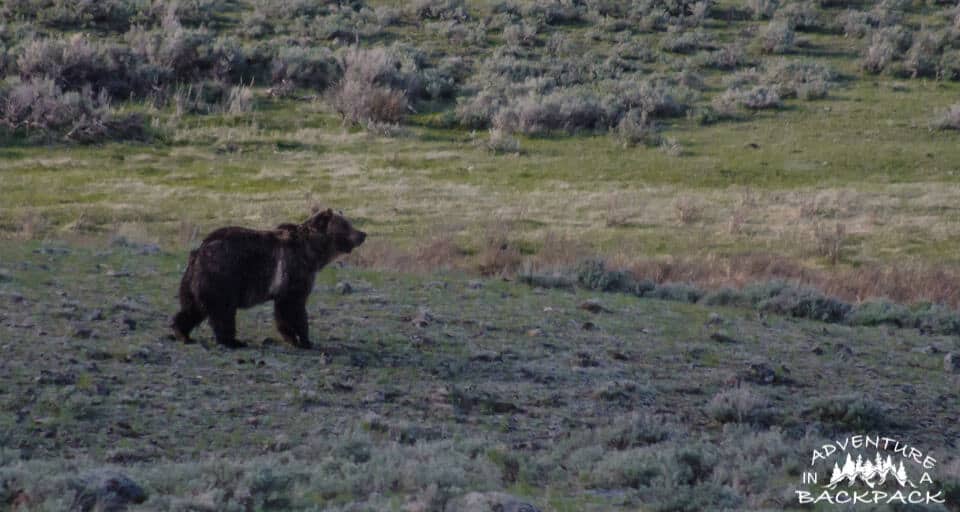 Less than 10 miles into the Lamar Valley, a group of cars were pulled over so we slowed down.  Sure enough, there was a Grizzly by the river!  By the time we got turned around and found a place to stop the car, he was strolling off into the valley after finishing his dinner of bison.  A coyote was picking on the bison as well.  This was off to a great start!

A coyote finishing the leftovers of the bison.

We took off from there with cameras at the ready.  A few miles down the road, Steph spotted a small black bear running down the hill toward the road!  No one else had seen him yet, so we stopped and snapped a few pictures.  Once another car came by, he decided to run across the road and into the woods.  Although we tried going down a dirt road near where he went, we didn’t find him again.  Bummer!

We named him Buttercup!

By this time, Steph was overwhelmed with joy.  Her goal was to see a bear, and within a half hour, we had seen TWO BEARS!  Now all we needed was a moose and a wolf and we’d be happy as could be!

Did you ask for a moose?  Well, here you are!  Although she was pretty well hidden in the reeds, we spotted a cow moose down by the river about 10-15 miles after the second bear.  She was just munching away without a care in the world!  We waited a while to see if she would step out of the reeds and into better view, but she didn’t so we continued on our drive. 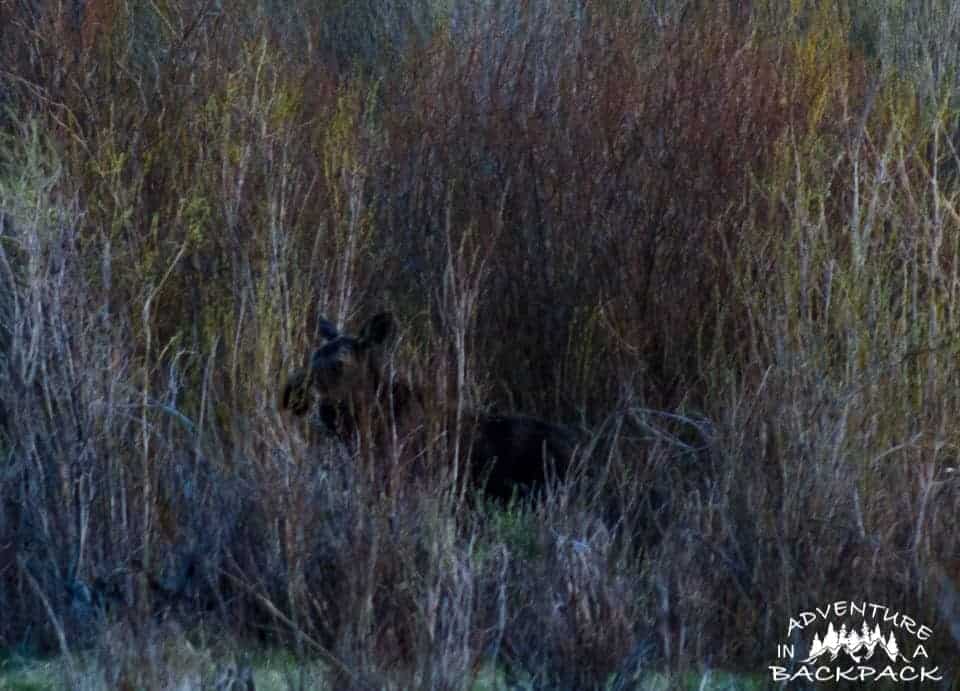 In the Lamar Valley, there is a huge valley that was just FILLED with bison.  I mean hundreds and hundreds of them, EVERYWHERE!  We had to stop and break out the binoculars a few times just to prove to each other that yes, those were MORE bison.  They were on the road, by the river, up the mountain: everywhere.  They didn’t seem to care about cars, either.  If they wanted to cross the road, you’d better stop because they are coming across!  We got several close up shots of them (from the safety of our car) because they were so close.

*Disclaimer* I noted that we were in the safety of our car.  DO NOT approach the bison on foot.  Stay a safe distance (25 yards or more) away or stay in your car.  They seem docile, but they are still wild animals that are unpredictable.  Be smart. 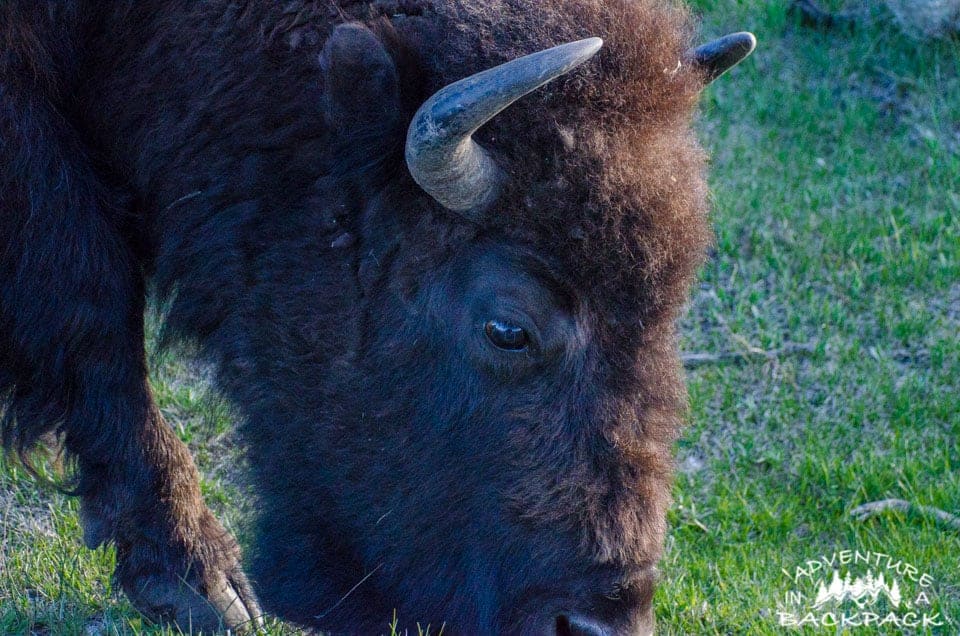 After the moose and all of the bison, we didn’t see any other wildlife.  No wolves, but we didn’t really expect to anyway since they tend to stay in the trees more or come out at night.  After seeing two bears, a moose, and hundreds of bison, we couldn’t have asked for more!  It was a great drive and we highly recommend it!

The full Yellowstone scenic drive will take at least one day (we broke it up into two days), but it allows you to cover a lot of the park in a relatively short time.  Since there was so much of the park that was closed, we didn’t get to cover all of it.  We imagine it would take two to three days to cover the full park, and that’s if you were just hitting highlights.  Take your time here and plan for plenty of time to view the park and the wildlife without being rushed.  You won’t regret it!

For more adventures, be sure to subscribe to our page below and check us out on Facebook as well!  Until next time, Live Vicariously!

Lone Star Geyser: Beating the Crowds – Adventure in a Backpack

Boondocking Near Yellowstone National Park - Adventure in a Backpack

[…] Yellowstone entrance.  This is a very scenic area and gorgeous views all around.  Check out our scenic drive around Yellowstone for awesome wildlife […]

Lone Star Geyser: Beating the Crowds - Adventure in a Backpack