6 Things to Do in Whittier Alaska 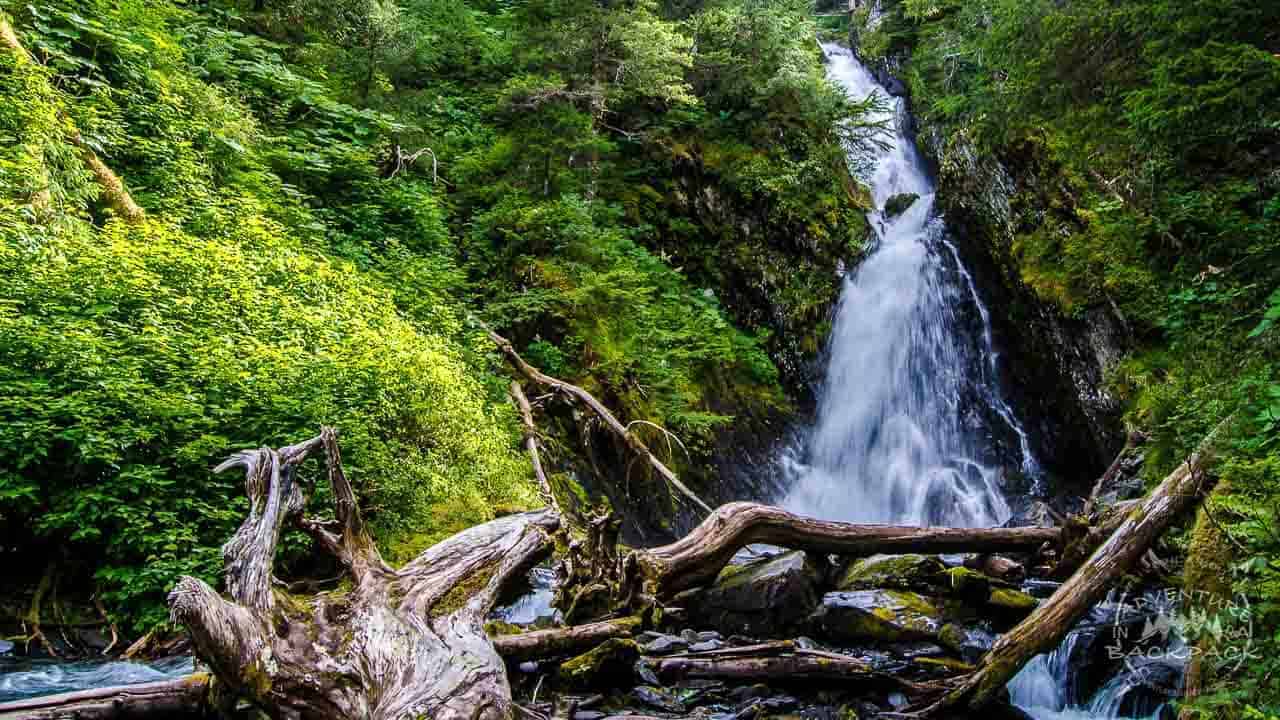 As we explored the area around Portage Glacier, we were intrigued to visit the port city of Whittier.  It was a turnoff at first that you have to pay to even get into the city (to go through the one lane tunnel), but it was totally worth the $13 round trip fee to find this secluded paradise of Whittier Alaska.  As we explored the area, we were amazed at the beauty and the lack of people in the city.

As mentioned, you do have to pay a fee to get into the city, as you must go through the Anton Anderson Memorial Tunnel.  The tunnel is just one lane and is shared by both cars and trains and is on a very strict schedule for letting each group pass through.  The tunnel to Whittier is 2.5 miles long and is the longest highway tunnel in North America!  It’s designed for -40 degree (F) temperatures, too, which is a pretty amazing feat.  Driving through the tunnel, it’s very dark and damp and reminded us of what we would think Batman has to travel through to get to his Bat Cave.  There are jet turbines that keep the tunnel ventilated, but there is still a very cave-like feel to the whole experience.

The city is very small, and as soon as you come to the main port area, you can find a place to park while you explore.  Walking down to the piers, watch as cruise ships, fishing boats, and recreational boats come in and out of the ports.  We walked along the pier searching for seals and other sea life, but struck out on seeing anything but seagulls.  We walked down to the harbor and watched as a boat filleted their days’ catch.

The rest of the city is very small, filled with guided fishing tour companies and a few trinket shops.  It’s not overly commercialized, however, and we really appreciated that.  There were not many tourists there and it seemed that the majority of the tourist traffic was coming in on the cruise ships rather than through the tunnel.  Even as the cruise ship came into port, it didn’t feel overly crowded.

In the entire area around Whittier and the Portage Valley, there are tons and tons of waterfalls.  We drove through Whittier exploring backroads and trying to find ways to get closer to the waterfalls.  While there aren’t many roads in Whittier (or Alaska as a whole), we were able to find two spots that took us to better views of the waterfalls.
I wish I could provide better directions to get to these falls, but one was at the end of a dirt road that passed by an apartment complex and a truck dealership.  From looking at the map after we got back, I think it was off of Reservoir Road, but really there aren’t many roads in Whittier anyway.

Whereas that area didn’t take us to the main waterfall, we were able to get to the creek below the falls and have a better view of the falls.  This one didn’t require any hiking to get to, as it was just about 50 yards from the parking area.  The water was rushing fast and loud while we hiked around the area.  It was cool down by the water, and the water itself was freezing.  Surrounding the viewpoint were bushes, trees, and tall grass that was thick to walk through.

We weren’t sure where Emerald Cove Trail would lead us to, but we wanted to explore and hopefully find a beach cove, so we figured this would be a good bet based on the name!  As we hiked up the trail, we seemed to be climbing further and further away from the water and higher and higher in elevation.  Since we didn’t know how long the trail was, we decided to turn back.  On our way back down the trail, we found a little hidden side trail that led down to a rocky cove – exactly what we were looking for!

This beautiful secluded little cove was the perfect area to hang out for a little while and enjoy the views.  Walking out onto the rocky peninsula, we could see all the way into the town of Whittier.  We watched as boats sailed by, and we could even see a glacier off in the distance across the bay.  The sharp rocks on the peninsula and in the cove were an interesting feature.  They were flat and thin and very sharp!  They were flaky as well, and just climbing up onto the peninsula we had to be careful not to pull the rocks down off of the wall.

The water in the cove was cold enough to not want to stay in it for more than a few minutes; although we had the slightest urge to reenact our wedding day and jump off the peninsula into the water!  I think we’ll save that reenactment for Caribbean waters, though!

We were very glad to have found this little cove and have a beach all to ourselves for the afternoon.

Wild berries have been abundant in Alaska, and Whittier was no exception.  On the Emerald Cove Trail, we saw some red berry clusters that we weren’t sure what they were.  As we continued to hike, we came across a family that was picking them and we asked what they were.  They replied that they are salmon berries and completely safe (and delicious) to eat.  So, we jumped right in and picked a few.  Boy were they right!  It was hard to get us off of the trail after that little discovery!

After we left the Emerald Cove Trail and headed back over to the waterfall, we found even more wild berries.  Wild blueberries this time and they were the most delicious blueberries we had ever eaten.  As we walked up the trail eating wild blueberries and taking pictures of waterfalls, we really thought we were in heaven.  What other hikes provide their own snacks?!

While we were camped HERE, just on the other side of Whittier near Portage Glacier, we did look to see if there were campsites available in Whittier.

Although there were no free campsites that we could find, there was a camping area right on the water.  It was a fee area and was $20/night or $120/week, which we found was not a bad price for a level campsite right on the water.  It was a gravel lot and plenty large enough for big rigs.  Keep in mind, though, the price to get through the tunnel with your rig will vary based on size and axels.  We only came through in our car, which cost $13 and was the cheapest option.
{GPS Coordinates to this campsite are: 60.779792, -148.717886}

We were originally unsure if Whittier would be worth the money to just get through the tunnel.  We were concerned that it would be a very touristy town that charged for every little nickel and dime item, which was the initial impression we though when they charged to get into the town at all.  However, we are very happy that we went ahead and visited the city, as we were pleasantly surprised at how quaint and secluded the town actually was.  It was not crowded with tourists and was a great place to explore for the day.  And I’m pretty sure we ate at least $13 worth of berries while we were there! This is definitely a must-see city if you are visiting Alaska! 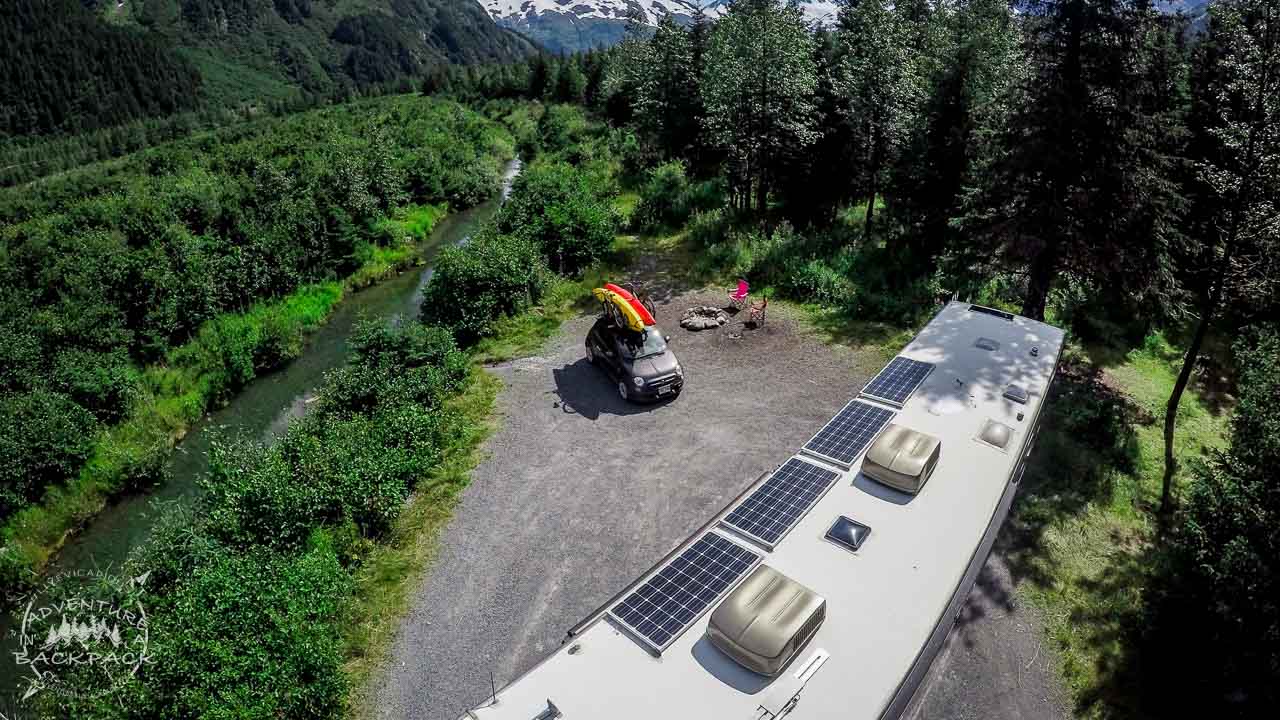 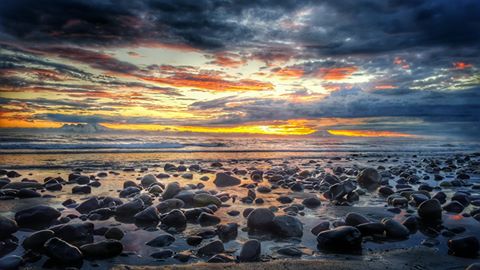 Next
Where to Stay and Things to do near Homer, Alaska
Click here to cancel reply.

Glaciers, Flies and Goodbyes in Seward Alaska | Adventure in a Backpack

[…] last little stop for our last hoorah in Alaska.  Back when we were visiting the gorgeous gem of Whittier Alaska, we had and chance meeting with some amazing people.  Casey from Be Alive actually ran up the […]