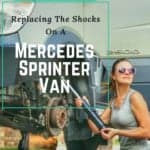 Our van has about 220,000 miles on it, and we are pretty sure the shocks are original to the van. So, it is time for an upgrade in suspension on our 2007 Sprinter! We replaced the front and rear shocks in this week’s Sprinter Maintenance video.

WHEN TO REPLACE SHOCKS ON A SPRINTER VAN

A much debated topic in mechanics, when to replace your shocks is really based on the wear and tear on your vehicle. Having an unusually bumpy or rocking vehicle when going over bumps is one way to tell that you need to replace your shocks. Our van had a lot of body roll, especially over bumpy roads, which indicated to us that we needed to replace the shocks. A rule of thumb is generally 50,000 miles, so ours was long past due at likely 225,000 miles. We aren’t sure if the shocks had ever been replaced, but our guess is that they hadn’t.

NOTE FOR FRONT SHOCKS: Amazon shows that these Bilstein Shocks do not fit a 2007 Sprinter. However, their information is incorrect and the ones that are listed here DO, in fact, fit a 2007 – 2014 Sprinter 2500. If you are unsure, check the Bilstein website HERE.

REPLACING SHOCKS ON A SPRINTER VAN

After we finished replacing the shocks on our Sprinter van, we immediately noticed a huge difference in the ride. After feeling how the van handles bumps and turns with the new shocks, we realized just how bad the old ones actually were! We’ll be excited to take the van on some more bumpy roads to see just how much of an improvement it was, but overall we are already very happy with the upgrade. And for just around $600, this was money well spent!

HOW TO CHOOSE THE CORRECT SHOCKS

There are 1000 different shock companies out there so it can be confusing to choose which brand to go with.  Our opinion: It doesn’t really matter.  Just check a few reviews and call it good.

Step 1:  Go To Amazon and Use their Parts Picker.  Click here for that.  You’ll be brought to a page that looks like the picture below.

Front Shocks typically have a ‘bolt’ on top with a thread and look similar to this:

Rear Shocks usually have a bushing (hole) on each end and look similar to this:

This was written for our 2007 Dodge Sprinter 2500 2 wheel Drive.  Changing shocks on most vans is a very similar process but the sizes of wrenches, sockets, and rachets you’ll need will vary.  Do your own research and check those ahead of time to make sure you have them on hand.  A well rounded set of hand tools will generally get you through most shock replacement projects.

Liberally soak all of the bolts you will be removing with a penetrating fluid like PB Blaster or Liquid Wrench.  (10 bolts total.  3 per side in the front.  2 per side on the back).  Preferably do this overnight.

We are going to start with the bolt goes through the floor and is accessible under the dash.

Replace the wheel, lower the van, replace the floor mat.

The process is the same except for the floor mat doesn’t need to be removed.  The top of the shock is accessed from the jack storage box under the dash.

Replacing the rear shocks on a sprinter is much easier than the front.  Removing the wheels is not necessary.

What kind of wheels and tires do you have on that thing? They look wider than stock. Are they smooth on the highway?

Have you ever replaced the struts or leaf springs?What're your thoughts on when to do that?

We have not replaced leaf springs, but we replaced the struts. Struts were replaced at the same time as the rear shocks.